May All Your Fish Come True !

Fish: Fabulous, Interesting, Sexy with a Halo to eat, this protein is the magic ingredient to some of the finest food I have ever appreciated to cook as Chef or consumer. Forgiving to all when understanding its needs; mercilessly bland, boring, and odiferous when not. Spend a quarter for a lemon, or fifty bucks for a sauce, fish can deliver on taste, whether investment or not. Fish, a protein with opportunity so clear that dollar per dollar on growing and yield, it outperforms poultry, pork, and meat. Lean for weight watching, rich for culinary expansion, fast for the home meal dilemma, fish favors those who want to learn its secrets. Pay attention to the market source of your fish purchases and the knowledge takes you on world tour envious of all including Marco Polo. Salty cold water, inland streams or mountain rivers, each source teaches an understanding of why ' fish are what they eat' from firm to soft texture, white or darker color, strong or subtle aroma. With each fish is a self contained statement of origin that cleanly defines a preference for preparations particular and rewarding. The adventure of learning is all yours for the fishing.

With that mini salute to fish and is shellfish brethren I hereby introduce my lifetime love and ventures with ' fish'. I have enthusiastically cooked and fantasticly enjoy while supporting in full form as a true a fishionado! I bring you my favorite thoughts in a blog you will love: May All Your Fish Come True! I will take away your agony and forward you the ecstacy to love my Fabously Intersting Sexy Halo of Fish.

Posted by Unknown at 3:55 PM No comments: 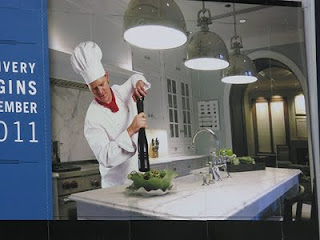 Is this you to the left in your perfect kitchen happily being your version of Julia Child, cooking meals for you, your family and friends on a daily basis in a neat organized high end kitchen? No?
Not exactly...I hate to cook....cooking is far too hard.....I have so much stress I cannot make time to cook....my kids are too demanding.....surviving is more important!

Ancient cultures have a saying: "when you go to war, dig two graves, one for your opponents and one for you।!" As I write I see a war going on between the inherited historic kitchen and its system and our present need to cook day to day. It looks like we are digging our own graves stressing over producing daily home meals. Time for some disruptive thinking on a more efficient productive space with support right down to groceries.

Early one Sunday when I was a six year old kid I accompanied my father to a restaurant we owned so he could review the previous night's receipts. With him in the office I stationed myself in the dark kitchen. Loving food, I just had to have something to eat. But what? It was so dark in the non window kitchen I could not even see a refrigerator door! Where there is that will, there is that way, and carefully I smelled my way to chilled wrapped deliciously cooked vegetables, meats and stews, true heaven on earth for a hungry kid. Mangia I did, and in those moments I found my own first fast food. Great food I could get fast! Fabulously tasty, classical food that came from the kitchen of true gourmet cooks well verse in traditional recipes of many cultures.

Where are we today? Is that great food our food today? Do we need it, want it, crave it? Do we cook for the same results in appearance, umami, satiation and price, with the time and lifestyle that came with the recipes or the system set up to support them? For the first time in hundreds of years, no matter how media stars and food writers, manufacturers and bloggers adjust a recipe in scale and scope, changing prep time, cook and eat- in time one can rarely deliver a plate that the consumer can actually execute that way. And even if they do, there are all those recipes that do not. Low fat, low salt, gluten free, altered foods, unreal timetables.... we are trying, but we need to succeed. Time to rethink the kitchen and system just as horse transportation took on a new norm that became the car. We are underdelivering to ourselves, by overdelivering on false reality. Something that use to be such a beautiful daily effort, to cook, has become a dilemma.

Seven years ago I was on a televised international committee ideation with designers, equipment manufacturers, chef's, growers, writers, marketers, family advocates and social media folk all throwing our ideas into a kitchen design pot of the future. As we continued we consistently queried the food savvy, varied age and experienced family audience for questions adding their imput to our emerging platforms. The end result was, that everyone got what THEY wanted and the kitchen is now an audio visual cooking center almost double in size with this endless stream of equipment, pots and pans that are used infrequently, a pantry with ready food prep, canned and frozen for convenience, a refrigerator with a list of take out or order in phone numbers or links to same and a the list goes on and on and on, close to being a family center.....but the evidence is clear....the cooking dilemma stills grows and I can solve it with your help!

Let's take a step back and think. Did consumers know they needed the car, the air conditioner, computer, itunes, iphones and ipads? No, but someone thought through a real not just temporary improvement and we moved forward. New goods improve our lifestyles and become integrated into our daily lives. Just as with other technologies we are hitting a new era in the kitchen It is time to talk and rebuild/build a more practical kitchen style. While no one including cooking sites, magazines, food companies and manufacturers want a change, it has to come.

Pretty kitchen above, nice tunic and hat. However, they may demonstrate a pazzazz that is costly to buy and questionable to execute. Some say a cooking dilemma. I say, The Cooking Conundrum!@, disruptive thinking, and with your help, coming to you soon.

Posted by Unknown at 9:14 AM No comments: