Love the term, The New Norm. Not often do I get a chance to use it. When it starts a 'new norm' needs followers. So I know in order to grow this norm, I should remind you of what Vegetable Alchemy is all about. How did I come up with the idea.? What are the design notes? Try to remember this.
For many years I have been cooking food, visiting and working in other countries with food and at many levels of the food chain: farm to table, manufacturing to retail, earth, sea, land and sky. I hit this idea that if a certain food made me feel light and kept my body science even and healthy, then I needed to investigate. I did. Vegetables, herbs and spices really moved on my food design board from garnish to center of plate recipes.
Am I a vegan, a vegetarian, a Chef non- loving of meat, fish, poultry or proteins other than vegetable? NO! No, I am not. I am saying that I found out more about what makes me feel so great, want to work out, do pilates, swim, bike, ride, jump horses, skate and run no matter the season.
The road to Vegetable Alchemy became clear. It took its path came from my hobby, architecture and design. Reading Form, Function and Design, a favorite of Jacques Grillo, the author, squared my thoughts. As an enthusiast for those design ideas shared, I found my recipes shifting in ingredients do new principles and discoveries in food and lifestyle. The recipes are now based on the end user first. I see it like this.
The form (end user) = my body; the function = my lifestyle today, far different than generations beforehand; the design = a chef's need for health, wellness and longevity.
And so Vegetable Alchemy was born. Coupled with dishes centered in Vegetable Alchemy, I add other proteins as key to garnish and flavor so a new recipe style, a better recipe style is born. Weekly dishes are coming. Safe and secure are why we love to eat, umami (that fifth sense in taste) satiation (that feeling of eating to just full) and the best of course, deliciousness. Try them. You will become a friend. We love our friends, we love the followers, we grow from fans. Join us! Vegetable Alchemy is 'the new norm.'
Posted by Unknown at 4:00 PM No comments: 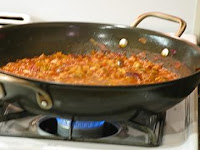 Never under estimate the power of a terrific bowl of chili! With a farmer's load of eggplant, I discovered ecstasy in both chili and a partner jump in cuisine to , using the same idea in an unbelievable bolognese. How did that happen? Just one of those fun filled dreams that I adapted from the plot! While I slept my thoughts were of Fall and eating chowder. I woke humming, 'Chowder, Chowder, Chowder.' The term 'chowder' comes from the French Chaudiere, or 'stew pot'. Since I like one dish meals, I thought, what an application for a classical technique and dish stew. But, Alert to self! Chowder no matter what the content, is secured in definition with cream. Exit 'chowder'. Enter 'chow' to my title! Suddenly chili is my new chow. Adjusting the recipe to a bolognese and you take on new 'chow' applications. Make both in a thick bottom cast iron pot. For the chili bring it to the table with serving bowls, a couple of beers and/or fabuloso not too pricey Zinfandel. 'Chow' down, chow down with vim and vigor!

Don't spend time worrying about bitterness in the eggplant. Since it is diced and seared buy mid size and spend time with more careful cooking. Try the dish one time with the skin on, the next time with skin off. Experiments brought me to using green pepper with skin off and the sweeter red pepper with the skin on the eggplant. I also tried a variety of beans but settled into the white northerns when others were too tannic or too demonstrative against the eggplant, skin on or off. Where you want to spend time is on the chiles! I suggest a great chile powder in both usages for convenience but nothing better than using 2 each whole ancho and chipotle wiped clean and going on a spice adventure.

As you heard them say if you've ever have been campin, "Don't come a knockin' if the trailer's rockin'!" Well, If you don't like what you cooked, don't knock on my wall.....do it again, and adjust to your likin' . Viva la Vegetable Alchemy, my fun, fit food with flavor!

1 14 oz can whole tomatoes in juice

garnish highlights: chopped cilantro, sour cream or queso fresca, chopped scallion and maybe a little rice if you want to savory it more, fontina is tangy but shredded white cheddar fits too

*chef's note: As a vegetable, Eggplant has the reputation for brain food. If you want to add other proteins, feel free. adjust seasoning. add a half a pound of protein or so with the onions when cooking. then add the veggies as directed after the protein is almost cooked.

How To Do> Heat the pot to medium temperature. Add the olive oil and eggplant. Stir and stir again until the eggplant starts to slightly brown. Add the onions. Stir. Add the peppers and garlic. Stir. Add the seasonings including your own take on salt and or pepper. Cook until peppers are wilted. Add beans and water and/or stock. Bring all to simmer with top partially on the pot. Cook slowly stirring occasionally to prevent sticking. Taste. Adjust all seasoning including chiles to your taste.
Bring to table with smiles, a few bowls and spoons, the garnishes and bevs of your choice. Bravo! You are now entering the world of Vegetable Alchemy!